Today’s macro is a version of the Anti-Joke Chicken,  a meme that starts with a joke setup and then subverts the joke with a non-punchline.

Some sample Anti-Joke Chicken macros include:

Knock knock / Come in.
Your Mama is so old / She’s probably going to die soon.
Why doesn’t God like fruitcake? / Because He doesn’t exist.

Most fat jokes rely heavily on the idea that a fat person is somehow lesser or substandard in comparison to people who aren’t fat. This Anti-Joke Chicken macro does something different, but I still don’t like it: 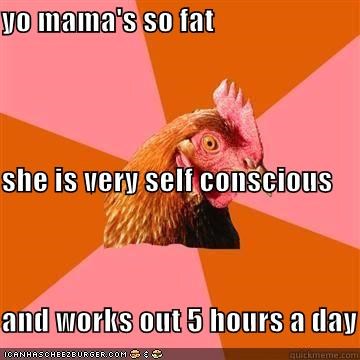 Obsessive exercising, or activity disorder, is a serious condition tied to anorexia and bulimia, where suffers have cognitive distortions about their body.

The Association for Body Image Disordered Eating (ABIDE) out of U.S. Davis has a clear description of such disordered thinking:

The Anti-Joke Chicken is supposed to be humorous via shock, but I don’t think it counts as subversion when the original joke is demeaning, and the subversion is not only demeaning, but also grim. It minimizes both the problems with weight-centric jokes and the realities of living in a society that supports self-loathing as motivation.

I made my own AJC. I hope you like it. 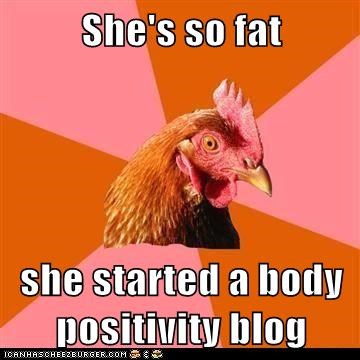